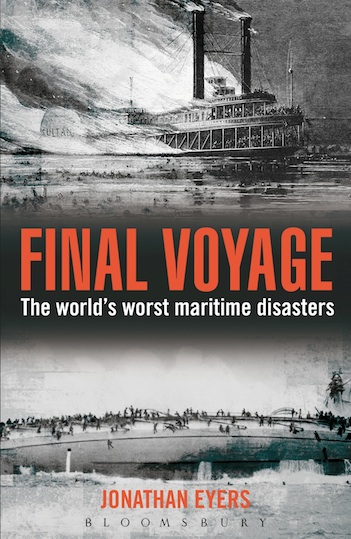 I bought a copy of this book while visiting the London Boat Show, intending to read it during the weekend. On the train going home I opened the book to glance at its contents and was immediately hooked. Despite the subject matter, death and destruction at sea, I found it very easy to read and the information well presented.

I was intrigued by some of the minutia of information presented by the author, such as the miraculous survival of Anne Welsh, latterly known as Ashpan Annie, mentioned in the chapter on the Halifax explosion of 1917. Or the strange case of the commander of the submarine USS Queenfish who, after sinking the Japanese transport the Awa Maru in 1945, was stripped of his command and court marshaled.

The book starts with the tragedy of the loss of HMS Association and accompanying ships under the command of Sir Cloudesley Shovell in 1707. The majority of the maritime disasters detailed in the book deal with wartime scenarios, ranging from the end of the American Civil war with the sinking of the Sultana in 1865, a short mention of the sinking of the Lusitania in 1915, the German battleship Bismarck in 1945, through the horrendous loss of allied and civilian lives in the overcrowded transport ships of the Japanese military transports during the final days of the Japanese involvement in WWII. The book draws to a close with the recounting of the loss of over 10,000 lives in the sinking of the severely overcrowded German transport Wilhelm Gustloff when only 19 miles off of the coast of Poland in January 1945.

The balance of the stories in the book relate to civilian shipping, mostly overloaded ferries. At a list price of £8.99 and at 191 pages the book is what I call "a darn good read" and I hope when this book is reprinted, as it surely will be, the author will expand on disasters with fewer fatalities especially on ferries and modern cruise ships.
Posted by Alex Willis at 03:50