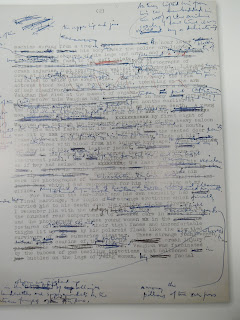 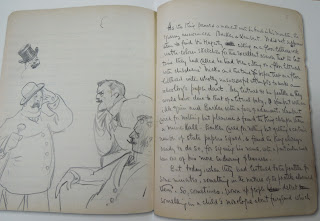 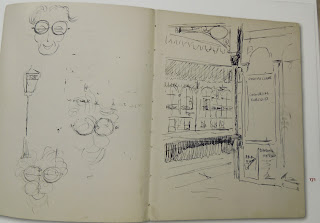 The picture below is my first novel, working title,"A Rose for Ruth" and represents ten years of work. 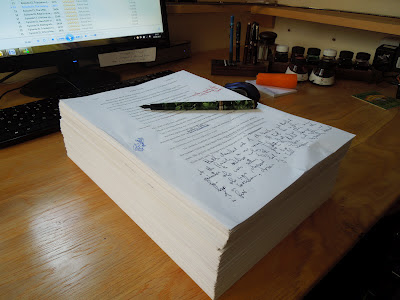 The first ten years were the easy part, I am now working on reducing the size of the MSS down to sub 120,000 words.

The real work will be to make what's left well punctuated, have no spelling mistakes and most importantly of all, be a good read.

Last week I visited with The No. 1 Writers' Publishing Agency. Kay advised me that most action adventure stories run up to 120,000 words. A quick press of the button on my computer revealed that my story had 150,881. What to do I wondered, especially since writers such as Jane Austin had used some of those very words, though not necessarily in the same order or quantity.


I looked again at random pages, beautiful prose I observed, (am I biased?) but what to cut and how? I have found Elmore Leonard's advice stark and simple, especially when he says that "readers skip through novels, but they won't skip dialogue", reassuring since when I first started writing, my good friend John, advised me to use dialogue to tell my story.
I subtracted 120K from 150K and saw how to go about it. I am 20% over target so the simple thing to do, initially, is to remove 20% from each chapter, but which of those beautifully crafted words to chop.
By now, most of you writers reading this will be shouting at the screen, dump the parts that have nothing to do with the progress of the story. Fair enough, but just as in black and white photography, when done correctly, can be beautiful, some current photo's of my grandsons for instance,  most people, with modern digital cameras, by default,  take photos in colour.
So, this brings me to the crux of the matter, how much colour to leave in the story and how do I blend the B&W with the Technicolour.
Comments are welcome.