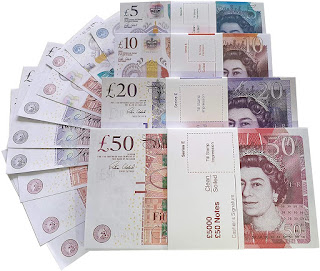 Could you live and function without cash, do you still write cheques? Is your mattress stuffed with £20 ,and £50 notes, saved religiously for a rainy day? These are questions that are being discussed more and more each day.

A few months ago, I and my wife were in London to have dinner with my son and his wife, and on the wall of the restaurant was a huge notice declaring that cash was no longer accepted.

These days with Covid 19 running riot through the World, even fewer places are now accepting cash, CASH IS DIRTY is the mantra. So how long will it be before cash disappears, relegated to memories and bottoms of the kitchen junk drawer. 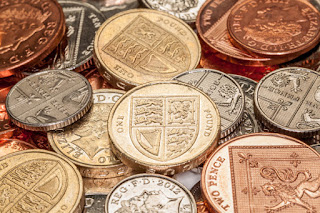 Do you remember the days gone by when as a child you would be given a coin to put in your piggy-bank, or as some people do, put all the silver coins in the change into a jar towards Christmas, or a holiday, or just as a way to save money for special something you always wanted.

Without cash the only way to save and spend will be to have a bank account, no matter what age you are.

Now some may say that giving a child a bank account is a wonderful idea, helping them to understand how to manage their money later in life and work towards that ever so important credit rating. But there is a drawback in that scenario - the tax man, he will want to know where little Johny's £20 came from, was it just a gift, or was it Grandpa's way of diverting untaxed income.

Some organisations would welcome a cashless society, and that would be mainly Law Enforcement agencies and Inland Revenue. One of societies greatest debilitating activities is illegal consumption of narcotics, mostly paid for by cash created from various forms of crime. Prostitution is funded by a steady flow of cash, slave wages are mostly in the form of cash, if they are paid anything at all.

But there is a down side to having no cash, and I will discuss this in tomorrow's blog.

If you don't want to miss any of these blogs, then you can sign up for updates on my blog page.
Posted by Alex Willis at 23:22 No comments: 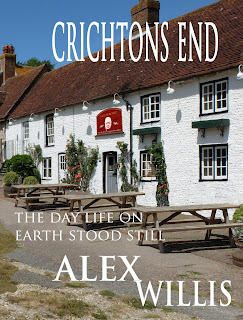 I am sometimes asked where do my ideas for a book come from. I usually reply by giving the example of a vegetable plot. To grow healthy, nourishing vegetables you must feed and water the ground that your vegetables are growing in. And so it is with writing, you need to feed your brain, and to do this you must read, read and keep on reading.

Quite often weeds might grow, but pulling them out allows the shoots of the vegetables to grow and flourish. Don't forget that some of the best manure comes out of the back end of a cow.

The  book cover on the left is the provisional cover for the next book I will be working on, Crichtons End.
The premise for the story is all about how life in a country village is turned on its head after electricity stops working.
It was inspired by the stage play by JM Barrie about what happens within a family, when roles are reversed.

The idea came to me one morning as I was driving to work and became stuck in a traffic jam. As I waited for traffic to resume moving I mused about what could cause electricity to stop working. I trolled through my memories of unusual facts for a feasible scenario and remembered the case back in 1859 when a solar flare wiped out most telegraph communications around the world.

Just imagine the scenario with no electricity - no mobile phones, no GPS, no radio, no television, all bank accounts and pensions frozen. Aircraft, trains, automobiles, ships all unusable. No street lighting at night, no gas or electricity in the home. Refrigerators and freezers warming up and the food inside spoiling.

I have started writing and the more research I do into the phenomenon of solar flares and HEMP explosions, I realise just how close and devastating the end of electricity use as we know it could be. 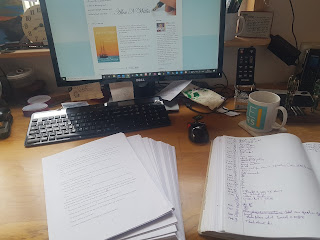 The Missing Heiress
First draft of the fifth book in the DCI Buchanan series.

The book was originally due for release at the end of March, but with the chaos that has been Covid19, it's expected release date will now be the 5th of September.

As well as getting the manuscript ready to be sent off to my editor, Rosemary, I am working on the cover.

The book will be published by Mount Pleasant Publishing (MPP) as an ePub, Paperback and Hardback, and will be available to order from all major bookshops, as are all of my books. They can also be requested for reading from your local library.

I will have copies available if you wish to order signed copies of the Paperback and Hardback books.

The Bodies in the Marina. The first book in the DCI Buchanan series.
eBook ISBN  978-1-913471-06-4.         Paperback ISBN  978-1-913471-07-4.            Hardback ISBN   978-1-913471-08-8
Glasgow cop, DCI Jack Buchanan is in Eastbourne, seconded to Sussex CID. His task is to investigate the death of an unidentified young woman found floating in the Marina and also the death of a Sussex Detective Sergeant, drowned in the harbour while still seat belted in his car.When he walked the beat in the Gorbals as a young PC, Jack’s idea of street justice was to take the miscreant down a dark alley, thump some sense into them, and send them on their way.Now, like a fish out of water, and in the genteel surroundings of Eastbourne, would Buchanan be in time to catch the killers before they strike again?

The Laminated Man. The second book in the DCI Buchanan series.

eBook ISBN  978-1-913471-09-5.         Paperback ISBN  978-1-913471-10-1.            Hardback ISBN   978-1-913471-11-8
In spite of being trapped between the never-ending pressure from above to retire, and the need to quickly resolve the latest, cold blooded murder. Buchanan grits his teeth and doggedly forges ahead with the investigation.Was the gruesome death of the businessman a one off, performed by some sadistic killer? Or was it a macabre message to those who think they can step out of line?Who sprayed superglue onto DS Street’s hair just weeks before her marriage to PC Hunter. Was it a warning of worse things to come if they didn’t back off?Come join Buchanan and his indomitable team of, DS Street, PC’s Hunter and Dexter as they unpick the truth from the warp and weft of lies and deceit spread before them. 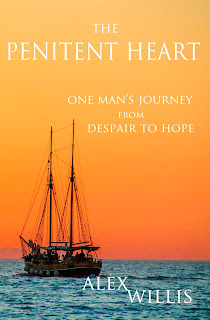 This is the revised cover for my book The Penitent Heart, published by Mount Pleasant Press and available to order from all book shops and libraries.

It is, as are all of my books, available as an ePub, Paperback, and Hardback.
Signed copies are available direct from me and some select bookshops.

If you live within the eastbourne area, my books are available to borrow from the community libraries.

My new website is now up and fully functional, you can find it here www.alexwillis.me.
Posted by Alex Willis at 13:53 No comments: