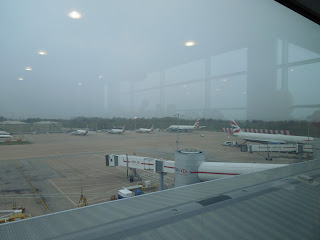 It's Thanksgiving in California today, tomorrow is Black Friday, more about that later. The reason for my presence here in California is my Mum. She had to go to hospital last week due to a mix-up in medication and I felt it was time to visit. I was supposed to fly out on the Tuesday morning at 0900 from Gatwick airport and you guessed it, no plane.

Delta's Boeing 767 was stuck in Atlanta, sick,  and another had to be found to replace it.

My flight eventually left three and a half hour late and after the standard one hour wait in immigration and customs I found I had missed my connecting flight, the second one of the day.

I went to the re-booking desk and explained to the nice lady behind the counter that the flight she was going to book me on would get me into San Francisco to late to get any connection to my Folks in Hollister. She said not to worry, they would put me on the first flight in the morning and to compensate they put me up in a 4star hotel. At least that's how it was described, shuttle, dinner and breakfast was included. It turned out to be OK, the bedroom was obviously a smoking room and the cleaners had sprayed the room with some kind of deodorant to kill the smell, making it worse.The flight to San Francisco was uneventful, especially because of my new Bose N/R headset. 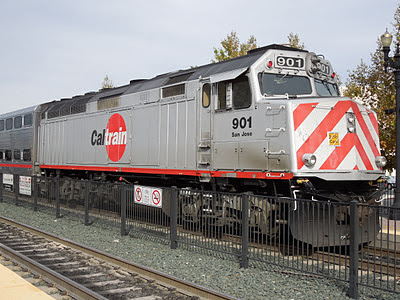 I took Bart north to San Bruno where I changed to the south-bound service to Milbrae and the transfer station for Caltrain. As  yet the link from San Francisco airport is not in full time service, although the tracks are in place and some maintenance trains use the tracks.

By the time I arrived in Hollister Mum was out of hospital and back home and ready to head off next evening to the bell practise at Church for the Sunday service. 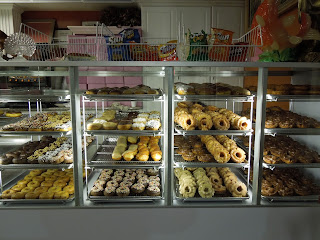 I'm not getting used to the time-zone change, I usually fall asleep by eight in the evening and wake somewhere about three in the morning. I listen to KCBS on a tiny radio, tucked under my pillow so as not to wake anyone, till about five in the morning when I get up, dress and head down to the doughnut shop.

This is the morning selection I can choose from, if you look at my Facebook page you'll see my daily count, and my daily choices.
Posted by Alex Willis at 11:36